Friends of the Blind Association participated on the activities of solidarity with the prisoners in their open hunger strike. 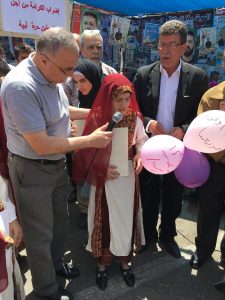 A group of the administrative board of Friends of the Blind Association, headed by the President of the Society Sheikh Hayyan Al-Idrisi, and teachers and students of Al-Qabas School for Visually Impaired participated in the sit-in tent at the center of Ramallh city to solidarity with the prisoners who are engaged in their hunger strike for the seventeenth day respectively.
This coincided with the presence of the Governor of Ramallah and Al-Bireh Dr. Laila Ghannam, and a group of journalists and media channels.

The president of the Association, Sheikh Hayyan Al-Idrisi, took part in an anti-prisoner speech. The blind students confirmed their support to stand beside the prisoners in their strike by presenting speeches, poems, songs and folk Dabka.

Accessibility by WAH
Secured By miniOrange